Porsche 911 Carrera T sports car that is lightweight and powerful

With the 911 Carrera T, Porsche is adding a lightweight sports car to its 911 lineup. The letter “T” stands for touring and describes models that provide a pure driving experience with excellent equipment. The standard 911 T comes with a seven-speed manual transmission. There is also an eight-speed PDK available. Rear seats are omitted. With a PASM sports suspension and 10 mm of lowering, the Porsche 911 Carrera T epitomizes sportiness and exhilarating driving enjoyment. The sound of it can be heard on winding country roads and mountain roads. In the interior, the sound of the six-cylinder boxer engine now stands out even more. 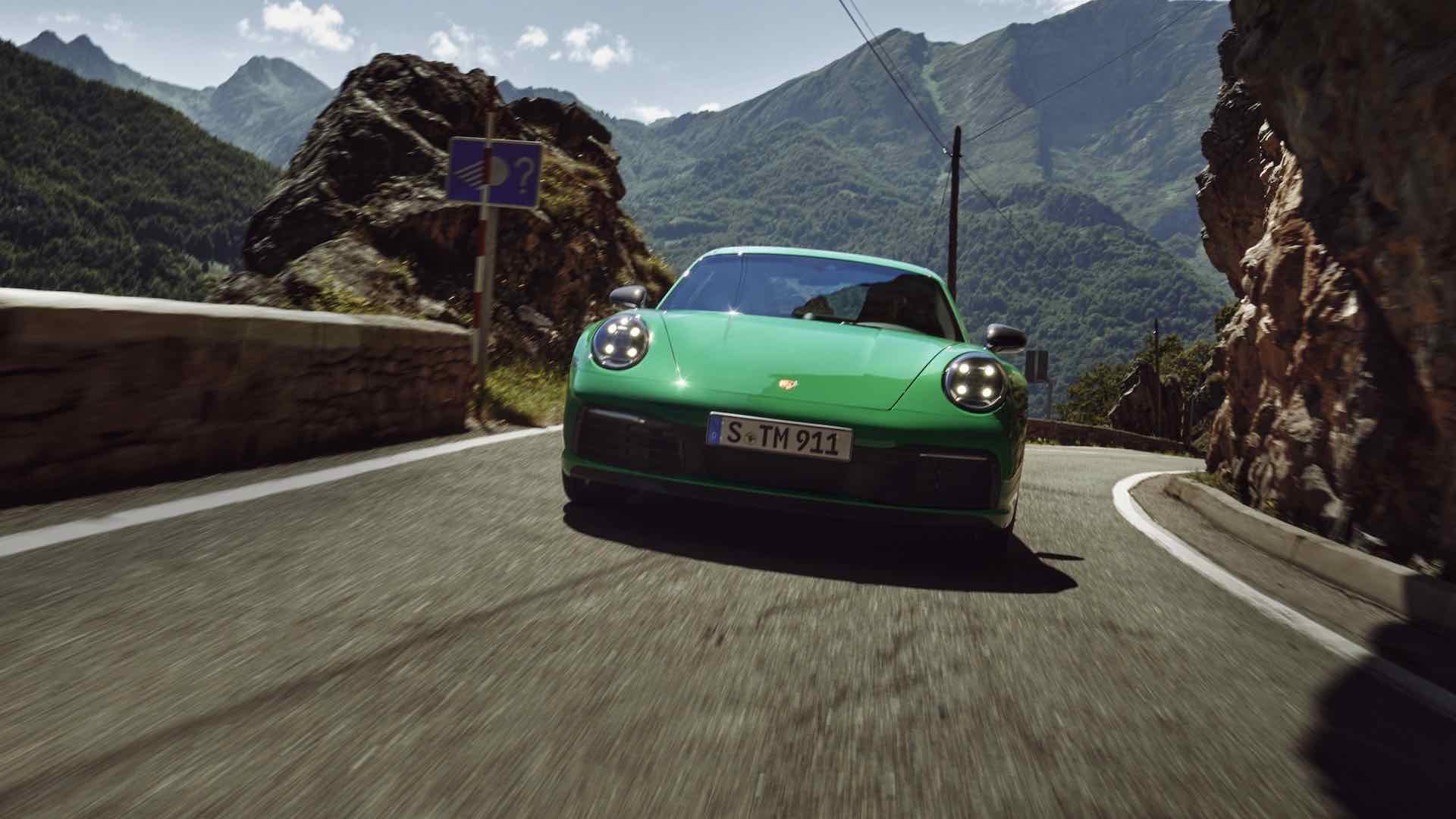 The 911 Carrera T slots in between the 911 Carrera and the 911 Carrera S. The Carrera T takes its bi-turbo engine with 283 kW (385 PS; 911 Carrera T models) and accelerates from zero to 100 km/h in 4.5 seconds and to a top speed of 291 km/h, from the entry-level 911. Porsche Torque Vectoring (PTV) with a mechanical rear differential lock is available as standard equipment on the Carrera S with a manual transmission.

Combined with the 385-PS engine, the 911 Carrera T also comes standard with the PASM sports suspension (-10 mm) and the Sport Chrono package. In addition to rear-axle steering, which is normally reserved for models above the 911 Carrera S, the Carrera T can also be ordered with it on request. Among the specific features of the T are the 20-inch and 21-inch Titanium Grey Carrera S wheels with 245/35 (front) and 305/30 (rear) tyres, respectively. As standard equipment, the 911 Carrera T comes with the GT sports steering wheel, the GT sports exhaust system, and the Sports Seats Plus (electric, four-way).

With a weight of 1,470 kg, the 911 Carrera T is 35 kg lighter than the 911 Carrera with a standard eight-speed PDK. The manual transmission is no longer available in the 911 Carrera. Besides the omitted back seats and reduced insulation, lightweight glass and a lightweight battery further reduce weight. In 1968, the 911 T was homologated as a touring car, hence the “T” in the model designation. This first 911 T was offered until 1973, and in 2017 Porsche revived the purist 911 variant with the 911 Carrera T of the 991 model line. With the 718 Cayman T, the 718 Boxster T, and the Macan T, the concept of a stripped-down, but exceptionally sporty setup has been successfully applied to other model lines.

The Porsche 911 Carrera T stands out with Dark Grey accentuating details on the exterior. Agate Grey is featured in contrast elements such as top and bottom trim on the exterior mirrors, the new door and rear logos, and the trim strips on the rear lid grille. There is also a gray tint on the top of the windscreen. Black high-gloss tailpipes finish the sports exhaust system. As a result, the new 911 Carrera T looks even more dynamic and extroverted.

With its four-way Sports Seats Plus, the car emphasizes its sportiness. Black matte trim and black high-gloss inlays complete the T interior. If customers want even more distinctiveness, they can opt for the optional Carrera T interior package. A contrasting color safety belt is installed in this case, which is either Slate Grey or Lizard Green. It’s the same with the decorative stitching, the embossed 911 logo on the headrests and the stripes on the seat centers as well. As an option, the logo and stitching can also be customized in Lizard Green and Slate Grey.

Porsche Carrera T offers optional Adaptive Sports Seats Plus (18-way, electric) as well as sportier and lighter full bucket seats with Race Tex seat centers. Carrera T interior packages include leather-trimmed interiors as an option. Along with the upper portions of the dashboard and door panel trim, the armrests on the door panels and center console are upholstered in leather.

In addition to Black, White, Guardsred, and Racing Yellow, the 911 Carrera T is offered in four metallic finishes: Deep Black, Gentian Blue, Ice Grey, and GTsilver. There are five special colors available: Chalk, Ruby Star Neo, Carmine Red, Shark Blue, and Python Green. A Paint to Sample programme is also available to 911 Carrera T buyers, which offers paintwork in more than 110 colors. You can order the Porsche 911 Carrera T now and it will be delivered to dealers in February 2023. Including VAT and country-specific equipment, the price in Germany starts at €123,845.

154 dead in Seoul stampede, including 26 foreigners

The new Porsche 911 Dakar is a monster off-roader

Global COVID-19 deaths have dropped by 90 percent since February

With his 15th win, Max Verstappen finished the F1 season on top